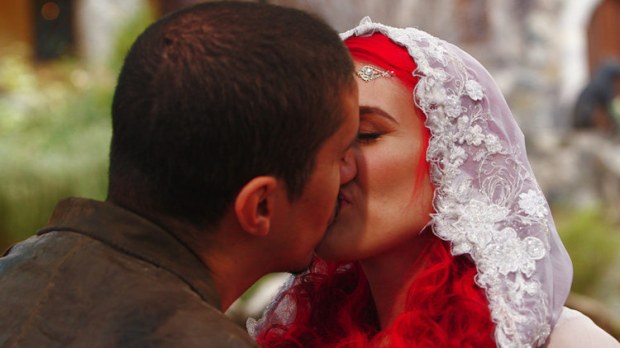 This is not a drill, in all likelihood you missed one of the best wedding-based reality TV shows ever.

If you, like me, have grown tired of the sneering perspective of Bridezillas and Say Yes To The Dress – where the entire point seems to be to place impossible expectations on young women, and then point and laugh as they collapse under the stress of it all – then it’s time for a wedding show about getting married for the right reasons.

That show is My Big Fat Geek Wedding, if you’ll pardon the pun.

On MBFGW (which aired March 11 at 10pm EST) we meet a self-proclaimed “geek” couple: Mandie Bettencourt and Julian Roman. They met online, but not through a dating site! It was while playing Final Fantasy that the first sparks of their love ignited.

Their dream wedding is a Lord of the Rings / Game of Thrones extravaganza, complete with swords and dragons. The couple brings in celebrity wedding planner Kristin Banta and genre expert Brandon Hillock to transform that dream into a spectacular reality.

What makes MBFGW so much better than other wedding-based shows is that Mandie and Julian play equal parts in planning their nuptials. Julian is just as thrilled to pick his ceremonial sword as Mandie is to select her dress – a refreshing change from the archetypal scene of a bride throwing a fit as her groom mopes in the corner.

They’re a couple that you want to be happy (unlike the competitive brides of Four Weddings – where part of the pleasure is how little attention they pay to their “soulmates” as they compete for a honeymoon) and it’s not just because they seem so perfectly suited. This a very cleverly produced reality program, which manages to entertain its audience without degrading its subjects. I got the feeling that the producers genuinely liked Julian and Mandie, so instead of teasing tantrums from them they actually showcase their interests (and I learnt a lot about geekdom).

MBFGW turned up, in all places, on the Syfy Channel, which is running a crazy new campaign called Syfy First where they’re actually listening to what viewers think of their programming. Throughout March they’ve been premiering pilots of new shows, and asking viewers to give feedback on them – it seems like they’ve realized that Twitter might actually be a better way of judging ratings than Nielsen. Pretty cool.

It’s definitely a good way to bring viewers like me – the casual geek who’s easily distracted by TLC – back to the channel, and it could even persuade diehard wedding show fans to expand their viewing diets.

If your cable provider is one of those listed on the Syfy website then you’ll be able to watch the entire My Big Fat Geek Wedding pilot here. However if you, like me, are stuck in Manhattan with Time Warner Cable then it’s gone for good – unless we get it commissioned! Now might be the time to start that letter-writing campaign…