Anybody wondering what Russell Brand’s been up to lately need wonder no more. The comedian, actor, and talk show host is usually running between fifty different projects, so for him to go strangely quiet on us should have been a hint that he was cooking something up.

Last week Brand debuted a brand (geddit?) new web series on his YouTube channel, called The Trews (a portmanteau of “true” and “news”).

Each episode begins with Brand singing his version of the Newsnight theme song, adding the lines “Here is The Trews,” before he launches into his daily dissection of the papers (The Daily Mail, The Telegraph, and occasionally The Sun), stripping them down to their basic motives and offering a Joseph Campbell-esque analysis of their overall narratives. It’s a bit of Charlie Brooker, a bit of The Daily Show, and bit of a flashback to That Was the Week That Was.

If you, like me, are a fan of Brand, then it all seems very familiar. He’s always found comedy in reading news articles aloud, and even used to work a routine into his stand-up where he read that day’s newspaper to the audience, critiquing it along the way. On his 2006 BBC 6 Music Radio Show he also seemed to take great pleasure in reading kiss-and-tell stories about himself to the listeners, discussing them with co-hosts Matt Morgan and Trevor Lock.

The Trews has that same raw feel to it, with Brand sitting in his living room, in a restaurant, or in what appears to be the lobby of… somewhere? And there’s no big hair, no eyeliner, and no producer having a heart attack behind the camera as Brand refuses to rein in his political views.

Clearly the series is a platform for the revolution that Brand has been talking about for years now.

The really interesting thing about The Trews is that it starts to become clear what Brand actually means by some of the more provocative statements he’s been making to the media recently.

Last year he enraged Newsnight host Jeremy Paxman by revealing that he has never voted in an election, and by encouraging viewers not to vote either. In one episode of The Trews, Brand compares the front page of The Daily Mail – an “obviously propagandic” paper – with the front page of The Guardian – which he admits he feels an allegiance to. Both front pages are plastered with the same viral selfie from the Oscars, albeit with different spins. “No choice,” Brand comments.

And it’s true. The basic problem – that Brand has been pointing to and shouting loudly about for so long – with modern democracy is that yes, we can choose, but we can’t choose our choices.

After thoroughly unpacking the intentions behind the headlines, Brand read out inspiring passages from various books, in an attempt to feed his viewers on a more spiritual level. Of course, he doesn’t tell us what the books are, or who wrote them, because apparently citations are for boffins.

The only problem for me is that as an avid fan of Brand’s BBC radio shows I can’t help hearing Brand’s good friend (and at various points writer/producer/co-host) Matt Morgan’s commentary on the videos, poking fun at his “Angry Jesus” look and probably telling him to calm down. 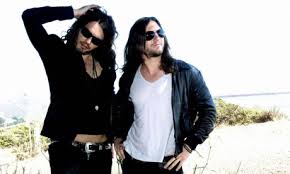 Is Russell Brand’s “comedy soulmate” Matt Morgan going to make an appearance on The Trews?

Actually, we haven’t seen who’s filming these yet… maybe ol’ MattyCakes is the man behind the camera…

In any case, at the very least you’ll be entertained by the ever-charismatic Brand, and you might even find yourself educated.

I can’t wait for tomorrow’s episode of The Trews!